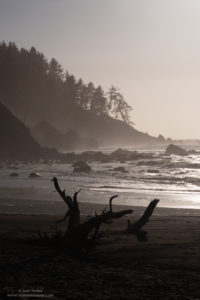 Some locations are so magical you are drawn to return. That is the case with Patrick’s Point State Park, CA. Being my third or fourth time at this campground I just can’t get enough. When I routed my trip, I intentionally planned a night to stay at this memorable spot. Our family discovered this spot a few years ago when Austin toured Humboldt State University in Arcata. He didn’t choose the school, but we still love the location. The camp sites are great, there are showers and beautiful beach access to Agate Beach. The reward for the steep path is this beautiful beach. Morning and evening fog is common and the agates are plentiful. This year, I came prepared and carried my full pack of lenses ready to shoot anything my heart desired. I started photographing waves. Tide was coming in and the crashing waves were mesmerizing. I spotted two loudly chirping, juvenile peregrine falcons. I have to admit, I wasn’t sure what they were at first, so once I captured a good image, I sent it to a friend to identify (thanks Mary!) What I thought was a mamma bird with the juveniles was really a pair of turkey vultures. The falcons appeared nervous even though they aren’t on the food chain for vultures. One of the vultures did “fly by” very closely and maybe it was to intimidate these young falcons.

When one of the falcons landed on a snag not too far away, I slowly inched closer taking a few shots along the way. I stopped easily 10 times before I feared going any closer. It appeared I made it nervous. It’s head twitched more, it defecated and I knew it would fly off soon. I zoomed my Olympus 40-150mm lens wider to allow room for the wings in the frame and sure enough, it took off. Still using burst mode, I got off four shots that were sharp but it flew toward me FAST and I couldn’t keep up with it’s movement. It was almost dusk, so, I switched back to capture images of the crashing waves. I took several with fast shutter speeds and as it darkened, I switched to slow shutter speeds. 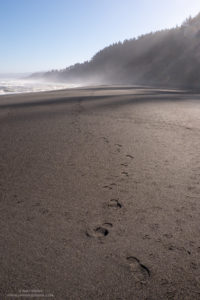 The next morning, I returned to the empty beach. Imagine having a beautiful beach to yourself. In the past, I have photographed many banana slugs on my way to the beach, but there were very few that morning. So, I enjoyed waves and the solitude before returning to camp for breakfast and packing to move on up the coast. 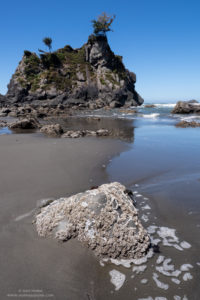 On many occasions, we have stopped at the tourist attraction, Trees of Mystery in Orick, CA. Mostly we stopped to use the restroom, look at all the touristy things and buy fudge. Never have we toured the trees. And I didn’t this time either. But, I found a great trail to Hidden Beach across the street from the Trees of Mystery. I read about it before my trip and despite the trail feeling secluded, I ventured to the beach. It was a ½ mile hike to the beach on a closed in “rainforesty” trail. I set up my running app so I could follow the distance. This is not a trail I would normally do on my own. But I read many reviews, carried my pepper spray and hiked FAST. After .10 miles, I told myself, “Before long, you will be at .20 miles” Then at .15 miles, I told myself, “only .10 more and you will be halfway.” And that continued until I arrived at the beach, which really took .60 miles! This beach was amazing. Driftwood covered the edges of this pristine beach and there was one other family enjoying the tranquility as well. I spent an hour taking it in and then returned to the teardrop. On the return hike, I only looked at my running app twice. Progress. 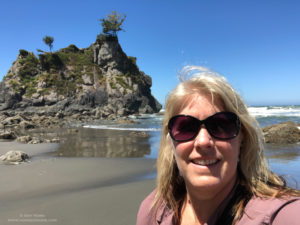 Me at Hidden Beach 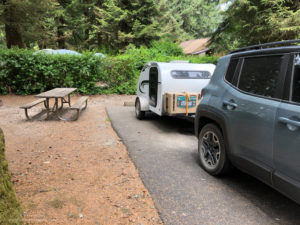 Finally, I made it to Oregon! Our family has driven through many of these southern Oregon towns but never had time to stop. So, I stopped at Harris Beach State Park just north of Brookings and spent three days. What a gem. Oregon State Parks are tremendous with clean bathrooms, free showers and great prices. Not to mention gasoline for my car just dropped .60 a gallon when I entered the state. I arrived just in time to check in and parking has been mastered! I backed in superbly to this spot, I took a photo and sent it home! My skills have progressed 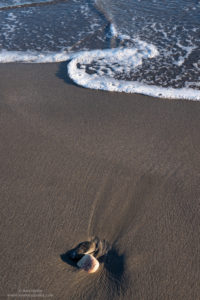 and I back in the trailer like I know what I am doing.

I have come to realize I can’t see or do it all. So, I am focusing on the spots around me and only venturing further off the path if it seems worth it for my study of water or my own personal interests. The beach was .35 miles from my camp spot and I spent a lot of time there. Tidepools and crashing waves kept me very busy. Clouds and fog settled in each night, so I didn’t go out for sunset, but after two weeks in, I have mastered campfire abilities and enjoy the

introspective time to myself. 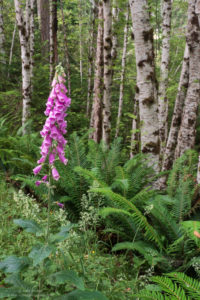 At the trailhead of the Shrader Old-Growth Forest

In addition to researching online, I bought the book, The Photographer’s Guide to the Oregon Coast. This book has every (well, maybe not) photogenic spot along the coast from North to South. Of course, I am traveling South to North, so I am reading the book backwards. I read about a great trail 13-miles inland from Gold Beach, just 40 miles from my camp. The Shrader Old-Growth Trail is a 1-mile loop of old-growth Douglas firs, Port Orford cedars, a stream and ferns. It sounded like a great trail and a nice change of pace. So, I went. The anxiety that overcame me at the trailhead was alarming. With not a car in sight for the past 13 miles, I feared the isolated trail. Immediately, I thought of my sister-in-law that hikes avidly and always chooses the trails most frequented. This was not that trail. My heart raced and breathing was difficult. I tried relaxing by photographing a few flowers at the trailhead and walked 25 feet down the trail. I just couldn’t keep going. Fear got the best of me. I returned to camp and my campfire. 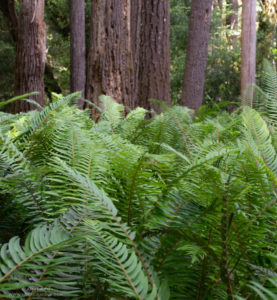 After a lot of soul searching, a new day, and counseling by my husband and sister I am proud to say I returned to the Shrader Old-Growth trail. I told myself, “a 1-mile loop should not be difficult.” I completed the loop and even took a few photos along the way. Of course, I did hear every leaf falling, branch breaking and trickle of water from the stream. But, I finished the hike. It took several hours to feel relieved and proud of my accomplishment. As a matter of fact, at first, I thought I lost 10-years of my life, but now I am ready to take on the next challenge.

5 thoughts on “Fighting My Fears”